‘Tis the season and these boys just can’t resist a good Santa hat!

In an effort to put all our cards on the table from the start, fresh from our homage to the Ospreys, here’s our tribute to Cardiff Blues, aka Gleision Caerdydd, if you’re so inclined.

The Blues formed in 2003, when the nine professional Welsh clubs had to reform into regional teams due to lack of money. Cardiff Rugby Football Club were allowed to form their own team, rather than amalgamating with any of the eight other professional clubs, and so the Blues were born.

It’s actually only recently that the team has started to perform really well and bring in the silverware (EDF Anglo-Welsh cup in 08-09 and the Amlin uropean cup in 09-10)  – their first few years were unfortunately a bit dire. Various players have come and gone – we used to have Mike Phillips, then he moved to the Ospreys for a rather larger pay cheque!

The Blues’ motto is ‘Strength Through Unity’, which is written across all their training gear. In the wonderful win over Toulouse last season, the skipper Paul Tito said that they had a desire “to go out and die for each other”. Pushing my team-spirit buttons!

We’ve got one of the greatest props in the world in the form of Gethin Jenkins. Some say he’s the best in his position in the world at the moment. He’s fantastic to watch at live games, just hearing the impact he makes when he tackles, seeing him get everywhere. Here’s what Martyn Williams reckons:

“He’s a frustrated openside flanker I think. He tries to teach me how to play the game, where I should be, where I shouldn’t be. He gets frustrated he’s in the front row and I think the scrummage is a dirty word in Geth’s language! He’d rather be out and about like a back rower. He’s got a soft side to him – he’s a very generous lad when he wants to be.”

“I have never seen a prop like Gethin. He’s got a very big engine, that fella. He’s got the highest work-rate of any prop I’ve seen. He’s class. When he gets out there he gives it death. I’d like to see how many kilometres he does in a game, chasing kicks and covering backs. He says some funny things at times, but his heart is right in it. Just look at the first tackle of the game against Toulouse and who made it. That just sums up Melon. He’s awesome.”

We’ve also got the legendary Martyn Williams as open-side flanker. I couldn’t possibly sing Nugget’s praises enough either in just one sentence, so I won’t go into it! Let’s just say he’s much loved – a national treasure, of course!

Then there’s the world-class centre partnership in the form of Tom Shanklin and ‘The big Doc’ Jamie Roberts. Shanks is 6’2″ and Jamie’s 6’4″, and together they make a  tough old pair. 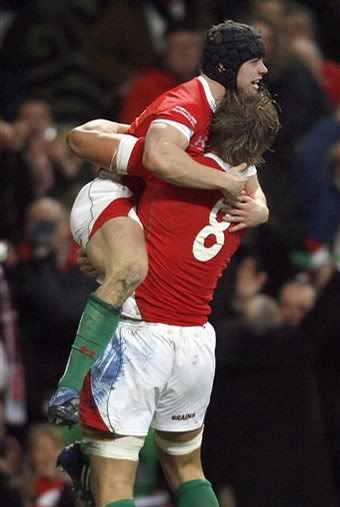 On the wing, we’ve got Leigh Halfpenny, always exciting to watch for his pace and acceleration. Up until this season his partner in crime was Andy Powell, always a joy! He’s now off to the Wasps, so best of luck to him there. 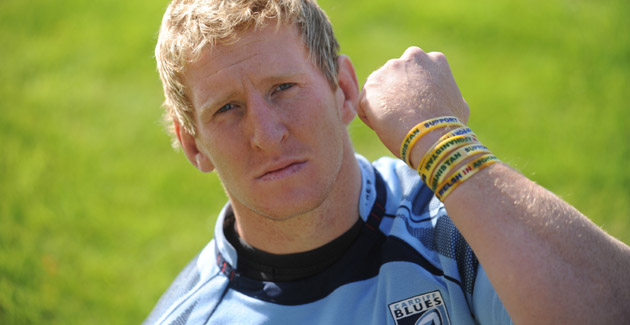 We’ve also got numerous other players who have been capped for Wales, notably John Yapp, Gareth Cooper, the hard as nails Bradley Davies (above) and serious contender for the coverted Scrum-Half throne, Richie Rees. 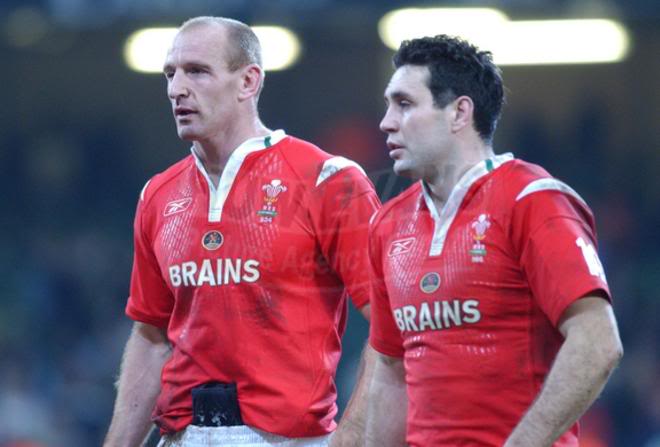 Up until just recently, we had the legend that is Alfie. After being the most capped Wales player ever, the man known to his mum as Gareth Thomas is now having a successful time with Rugby League side the Celtic Crusaders! 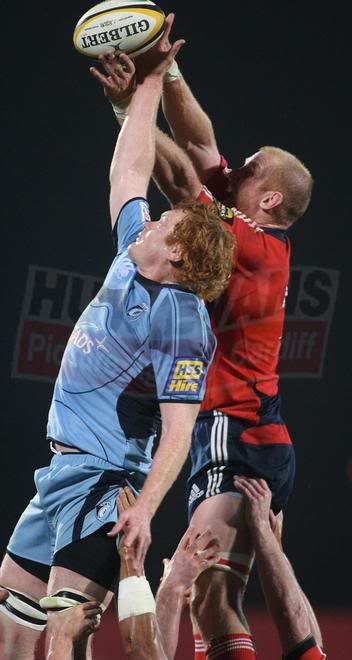 Paul Tito, aka ‘Fish’, aka simply ‘Tito’, has been a fantastic choice of captain. He’s a lock, so he leads from the front, and he is a serious grafter. He puts in tonnes of work, and is always hard as nails, and the Cardiff Blues supporters have really taken him to their hearts. He’s been here for a few years now, and his appearance and his work on the field is usually greeted by a chant of ‘Teeee-to, Teeee-to!’. He used to play for the New Zealand Maori team, and on the residency rules is now eligible to play for Wales…watch this space. You can’t miss him. 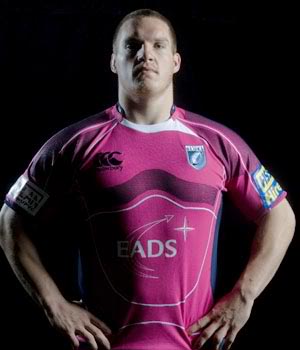 Here’s another reason to love this team – obviously they wear blue most of the time, but they have a hot pink away strip. Stade Francais may have the corner in pastel, but we’ve got an unmissable version too! Here’s Gethin, working hard to make it manly. Seriously, though, the boys first wore these to raise awareness for cancer research. Thanks to the popularity with the supporters, it’s now the away colour too.

The Blues’ move from Cardiff Arms Park to the new stadium has been a worrying, difficult affair. Whereas the Arms Park was bang in the centre of Cardiff, the new place is something of a trek for most of us, being bang in the middle of Grangetown (Strangetown).

The Blues are also paying an extortionate amount to rent the place – they don’t own it. Being a 25,000 seat stadium, supporters can rattle around in there sometimes when there’s a game that’s not considered important by the majority.

Still, the Ospreys have had the same problem of not enough bums on seats with their new stadium, and that’s only a 20,000 capacity. What really needs to happen is MORE PEOPLE go and watch rugby!

Go on, chivvy your friends and get going!

Words by Ellie, pictures by various, hover over for details.